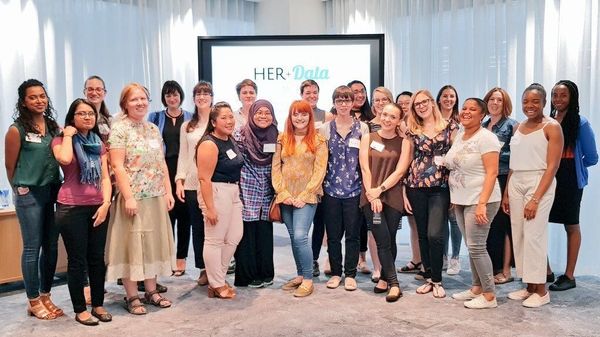 Gender Equality at Work and Women in Data

I am excited to be speaking at the HER Plus Data (@herplusdatamcr) meet up, in Manchester, on Thursday. Having been asked to talk about some of the issues faced by women working in data I have been reflecting on my career, and various gender equality issues, in preparation.

2018 has been such an important year for gender equality starting in January with the BBC China Editor Carrie Gracie resigning over the 50% pay gap between her and her two male counterparts. This was followed by the requirement from April for all large companies to provide anonymised data on male verses female salaries.

I’ve seen a business go from having large numbers of women in senior roles, to having almost none in just a few years. When strategic decisions and market forces caused the company to restructure, it appears men quickly dominated the higher ranking roles. It makes sense, that in times of trouble, senior executives choose to promote those who they trust most. But it may be more than that, there may be a subconscious bias at play as many of those promoted were old drinking buddies rather than just colleagues.

Senior women, who often had children, left the business I worked in, but it was impossible to tell if they jumped or were pushed. In the end, only 2 of the top 30 people in the business were women. My leadership team, my manager’s leadership team and my reporting line to the CEO were all men. I was the only woman in around 15 middle and senior management. The most amazing thing was, the men didn’t notice. When I told my boss, he seemed totally unaware and the rumour was that the CEO thought it not a priority.

This is why the recent wave of awareness of the discrimination that women face is so important. It’s no longer acceptable to dismiss these issues and the reporting requirement ensures companies are now obliged to have an action plan and woman have backing to their calls for equal pay and gender equality.

Women being overlooked for promotion may not be overt sexism but down to the choices women have to make. Do they want to get involved in after work office politics, spending time networking and entertaining, or do women just want to get on with their job? Hardworking career focused women may be missing out on these higher level roles due to the fact that they avoided an evening or two of getting drunk with the boss.

Which seems like a sensible idea as, another thing women chose not to do is to put themselves inadvertently in a situation that may lead to sexual harassment. With the Arcadia boss Philip Green being the centre of some sexual harassment and bullying allegations, it is once again headline news.

I have never been the victim of sexual assault or discrimination but there are a number of incidents that I am now reassessing. I accepted them at the time, seeing them simply as the result of being in a fun workplace where people were friends as well as colleagues and regularly socialised together.

These minor injustices include a copy of The Sun being left daily on the desk behind me and both male and female managers would sit behind me and flick through the pages. I’ve had senior managers announce to my team rumours of an office romance I was involved in and all the male team members, including managers, partaking in a Christmas Party tradition of ranking the female graduates by attractiveness.

The effect of these incidents was to make me feel uncomfortable and my concentration and enjoyment at work must have been impacted, if only in a small way. Looking back I now think all these incidents are unacceptable and would deal with them if they took place in my team. I am sure many women have experienced such incidents, and the recent highlight on sexual harassment and gender equality in the workplace may lead these women to reassess incidents in their lives that they had long ago dismissed as ‘one of those things’.

To have Children or not?

Another choice women have to make which is when, or more often whether, to have children. The most commonly discussed issue impacting women’s career progression is childcare responsibilities and taking time out for maternity leave.  The fact is that having children, and going off on maternity leave, can mean you take a hefty pay cut, especially if you want to go part time on your return to work. But what about women that don’t have children, either through choice or circumstance? This year has seen an increase in what the media has dubbed “childless women” in the workplace.

I have a particular interest in the issues facing single or childless woman, due to the fact that I have been single for about half of my career and don’t have children. If having children is the main bar to women’s success, why aren’t all the “childless women” on the board? In fact, in my personal experience, I see women with children remaining with their existing employers and progressing through the hierarchy, albeit, more slowly, whereas childless women seem to struggle more with the stresses of leadership roles. Stress related illnesses and, what is often described as ‘breakdowns’, seem a regular conversational topic. If you don’t have a family, a partner or children that provide a bit of perspective when you’re not at work, a career problem can seem so much bigger. Many of the women I know are leaving traditional employment looking for a more fulfilling lifestyle, rejecting the usual measures of success – a large team, more money and an impressive job title.

I’m passionate about Women in Data events, as they allow women to discuss barriers to career progression in a more personal and open way, that probably wouldn’t be comfortable in a mixed environment. The supportive environment allows women to speak the truth about their working lives and I always find them inspiring and uplifting. If you would like more information about Women in Data then please get in touch via info@redtigerconsulting.co.uk, or click on the link for the Manchester group https://www.meetup.com, or if you are based in London try the Women In Data group.