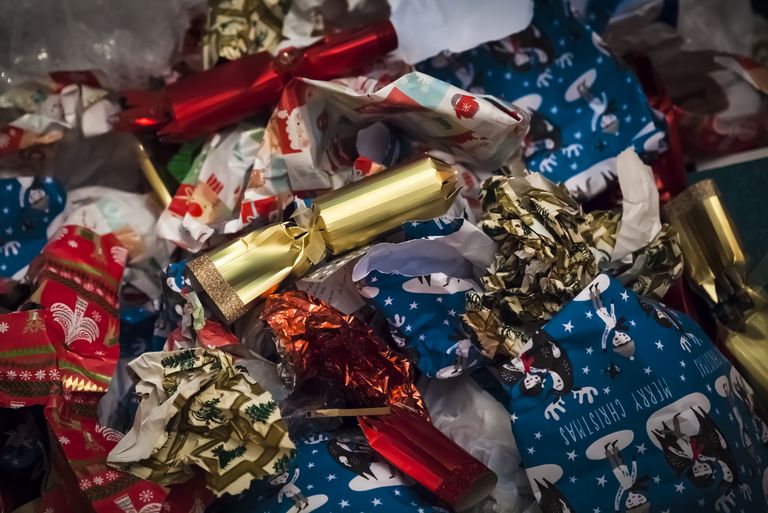 So Christmas is done for another year, and we hope you had an excellent one. All that is left now is extensive amounts of cardboard packaging and wrapping paper! Those of you with large families, particularly those of you with kids, will not appreciate the amount of waste that Christmas tends to generate.  A walk down any residential street after Christmas will see refuse bins overflowing with debris from the celebrations.

I recall Christmas time as a child when my Dad would be armed with a bin bag in the lounge to gather all of the wrapping paper and cardboard as soon as a present was opened. I later learnt that this was a ploy to avoid any smaller presents (or assembly instructions) being inadvertently thrown out with the rubbish. This Christmas I found myself employing a similar tactic (don’t we all suddenly find ourselves doing things that our parents do, after swearing we never would?) and so am now left with bin bags filled with wrapping paper – and what will become of these?

It is a waste

Let’s face it, the UK is still pretty pitiful at recycling. According to figures from DEFRA, the UK recycling rate for waste from households was 45.2% in 2016. The EU Target (as of now we are still in the EU) is to recycle at least 50% of household waste by 2020.  Wales are leading the way in the UK, with 57.3% and Scotland lagging behind on 42.8%.  Austria leads the way in Europe, with 63% and Germany not far behind on 62%.

Recycling certainly seems to be headline news again – largely helped by the sickening footage of plastic waste on programmes like Blue Planet. Walkers Crisps have launched their packet recycling scheme which will hopefully help remove some of those crisp packets that seem to be ubiquitous in any wind blown collection of rubbish.

I believe there are few different ways we can contribute, some can start now and others to consider for next Christmas.

The snobs amongst you may think twice about buying someone else’s unwanted items but there are plenty of good products to be found if you are prepared to look. My brother used to get second hand books from a friend at work to give to my children at Christmas (note: try to avoid those books for younger children with the flaps that inevitably are removed by exploring fingers). Second hand products can often be found without their original wrapping so an ideal way to help keep packaging to a minimum. There are plenty of good products, if you have an eye for spotting, at either charity shops or car boot sales and the satisfaction of finding a second hand gem is not to be scoffed at.

Drawing on a theme of a previous blog doing your shopping locally, rather than online, will help with minimising the amount of packaging. Quite often locally produced gifts may not have any packaging or will be packed in a more environmentally conscious manner such as an artisan paper bag.

Unwrapping presents is one of the main thrills of Christmas but I dread to think how many trees were sacrificed in order to service the UK’s wrapping paper requirements this year.  Some of the more expensive wrapping papers (particularly those with the silver and gold foil) can’t be as recyclable so I would avoid those in the future.  There are also a number of Eco friendly/recycled gift wrapping paper that you can buy. Of course, you can always try and retain any wrapping that you removed from your presents (harder to do with young kids) and recycle for next year!

Manufacturers and distributors such as Amazon have a big part to play in all of this. It is happening slowly in grocery where manufacturers are under increased pressure to reduce the amount of plastics and packaging and people are deliberately buying hand-picked fruit in favour of wrapped produce.  For those of you lucky enough to still have an independent local green grocer see how much plastic is on display there compared to a supermarket! A number of retailers are now offering reduced price refills (from coffee to detergents to cooking oil) in a bid to reduce the amount of waste.  This could be a great way for high street retailers to drive extra custom into physical stores.

With this year rapidly coming to an end and the New Year bringing the desire to make a few changes, why not make reducing waste one of them? In one of the next Red Tiger Consulting blogs we will look into how to make some career changes for the New Year so stay in touch.

It's time to excel (at Excel)

Post Lockdown - What are our predictions for the future?

Business Survival (and Triumph) in the face of Adversity